What's on your mind?

Ive come to the conclusion that it increases the loot drop goodies after fighting and visiting pit stops but would really like to know if that is it.

I keep ignoring it but what does it do if I give in??? 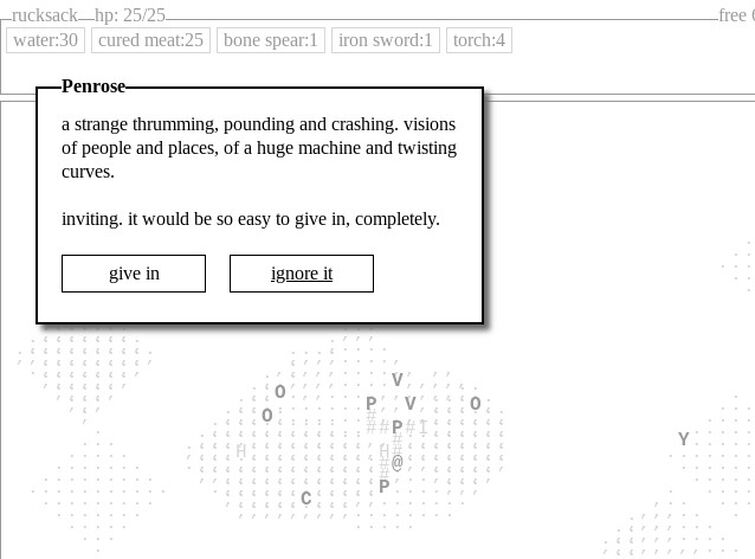 Is there anyway to get more water when you go on adventures in a dusty path? i already have everything unlocked besides like the full map and the starship, i keep dying because i can’t get back home before i run outta water

Hi I've found the Spaceship and have never gotten this far in the game before. I haven't finished exploring the map yet and would like to do so. If I lift off in the spaceship can I come back to my village?

I very recently finished this game, while I VERY MUCH liked it, I was dissapointed during the mid-game when I hit the hut and gatherer limit, I thought it would be much better as a game where you can keep expanding untill you have an empire of sorts. I downloaded it and am going through the games code, I have removed the hut limit, added new town names for expansion, am adding new craft options and am (Trying) to do some map expansion (With the limited coding knowledge I have). If anyone has felt this way and perhaps would like to try out my expansion mod (assuming I can get it done) feel free to let me know.

What do you think
It will end up messy, there is a good reason it stops where it does
It might be neat to put an empire-building twist on the game

This is the place to talk about your favorite topic, to share news, theories, ideas, and to connect with others. The content from your Forum has been converted to Discussions posts, so nothing has been lost.

To learn more about what you can do here, check out community.wikia.com/wiki/Help:Discussions

If you're an admin on this community, read more about how you can customize your Discussions and set up guidelines for contributors: community.wikia.com/wiki/Help:Admin_and_Moderator_Tools_in_Discussions

On the browser version I'm unable to give occupations to my villagers, I'm assuming I just press the buttons to the right of the occupation, but when I do, nothing happens.